The food of Northern India is the speciality of Manvirro’s Indian Grill. Run by Tony Kandola and his brother Kal Kandola, Manvirro’s opened January 19 and has proved so popular that the brothers are now opening a second Manvirro’s in Nanaimo.

“I have been running Indian restaurants in other places for nearly 10 years now and I thought, yes, the Comox Valley needs one,” he said. “We serve food from all over the northern region of India which is the most popular region for Indian cuisine over here.”

The word “grill” in the name refers to the hot grilling ovens in which they cook both breads and other clay pot, or Tandoor, dishes.

“The hot ovens burn off a lot of the fat so the food is tasty but also lower in fat content, so they are very healthy dishes,” said Kandola.

He said patrons should not be worried about Indian food being too hot or spicy. You can order your food mild, medium or hot.

“If you want spicy food, we do make it and you can order a really spicy vindaloo dish for example ,” he said, “but our food can also be ordered very mild, medium or whatever level of spiciness the customer likes the most. It’s completely to their taste.”

Located at #1-450 Ryan Road, Courtenay, in the former Stavros Greek Restaurant, Kandola said they updated and renovated the site and installed special equipment such as their Tandoor ovens. They also have big screen TVs for customers to watch games or other events.

In December 2014 Manvirro’s opened a second Restaurant in Nanaimo. It is located at 1045B Terminal Avenue, Nanaimo, BC. 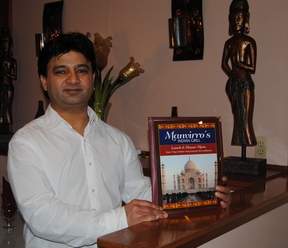